More and more, in numerous applications, industrial automation and more (cars, machinery, automation, smart homes, agricultural farms, etc.), need to be able to allow data transfer. For this reason, components such as gateways and converters were created for easy integration and remote control. It provides both hardware and software bridges for various subsystems that have implemented various communication media.

One of the oldest communication protocols, widely implemented and used, is the ModBus protocol. It was developed in 1979 by Modicon Incorporated for industrial automation. It later became an industry standard as a method for transferring discrete units (inputs, outputs, analog information, etc.) between industrial equipment and monitoring systems. At the moment, the ModBus protocol benefits from a wide implementation due to its simplicity in implementation, the fact that it is open-source (does not require license costs) and the fact that it has been adapted to technological evolution, moving from the classic serial transport environment to the Ethernet.

However, a lot of equipment has implemented the ModBus communication protocol on the serial line, for several reasons: it represents an older implementation, it is simpler and less expensive. The current problem arises when these equipment with the serial implementation of the protocol must be connected to Ethernet networks (Internet)

The Midas company addressed this need by developing a Gateway module that ensures protocol and hardware conversion from Ethernet to RS485 (serial physical interface). It started from the idea of ​​a simple to configure, simple to use and robust industrial product. The result was a small device called ETH2RS485MB, a gateway from ModBus TCP on the ethernet interface to ModBus RTU on the RS485 interface.

Each of the above requirements were addressed and resolved as follows:

This product was developed based on the previous experience of Midas & Co. in the design and manufacture of electronic modules and automation elements, the result being the first Ethernet Gateway designed and manufactured in Romania. 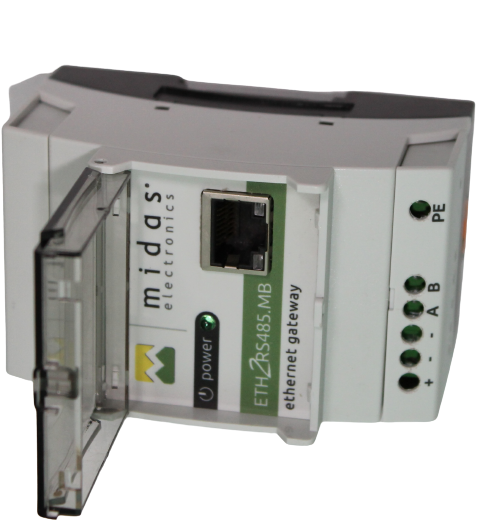